Simply click on one of the images to open it in a new window. You can then download it by clicking on “Save”. 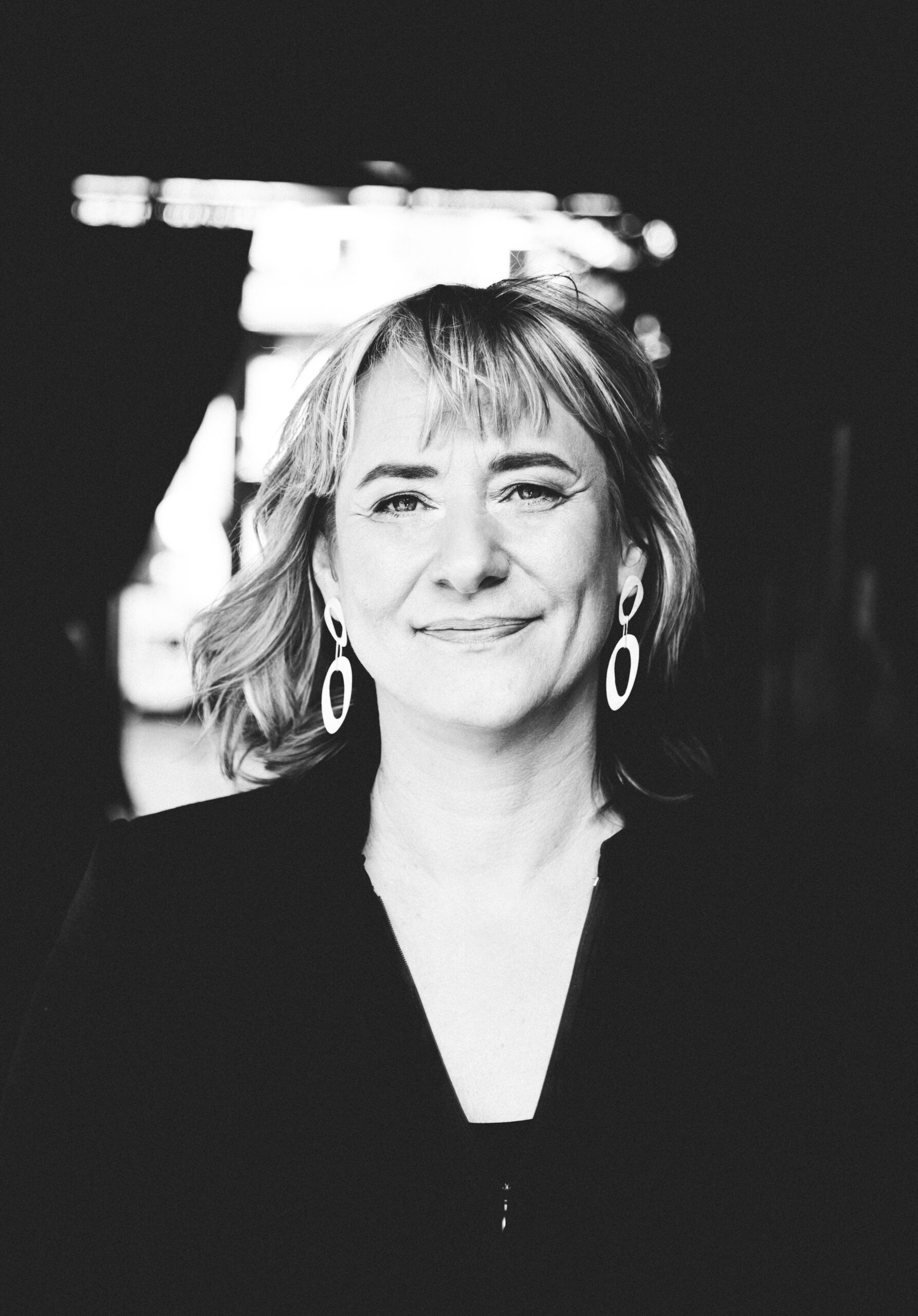 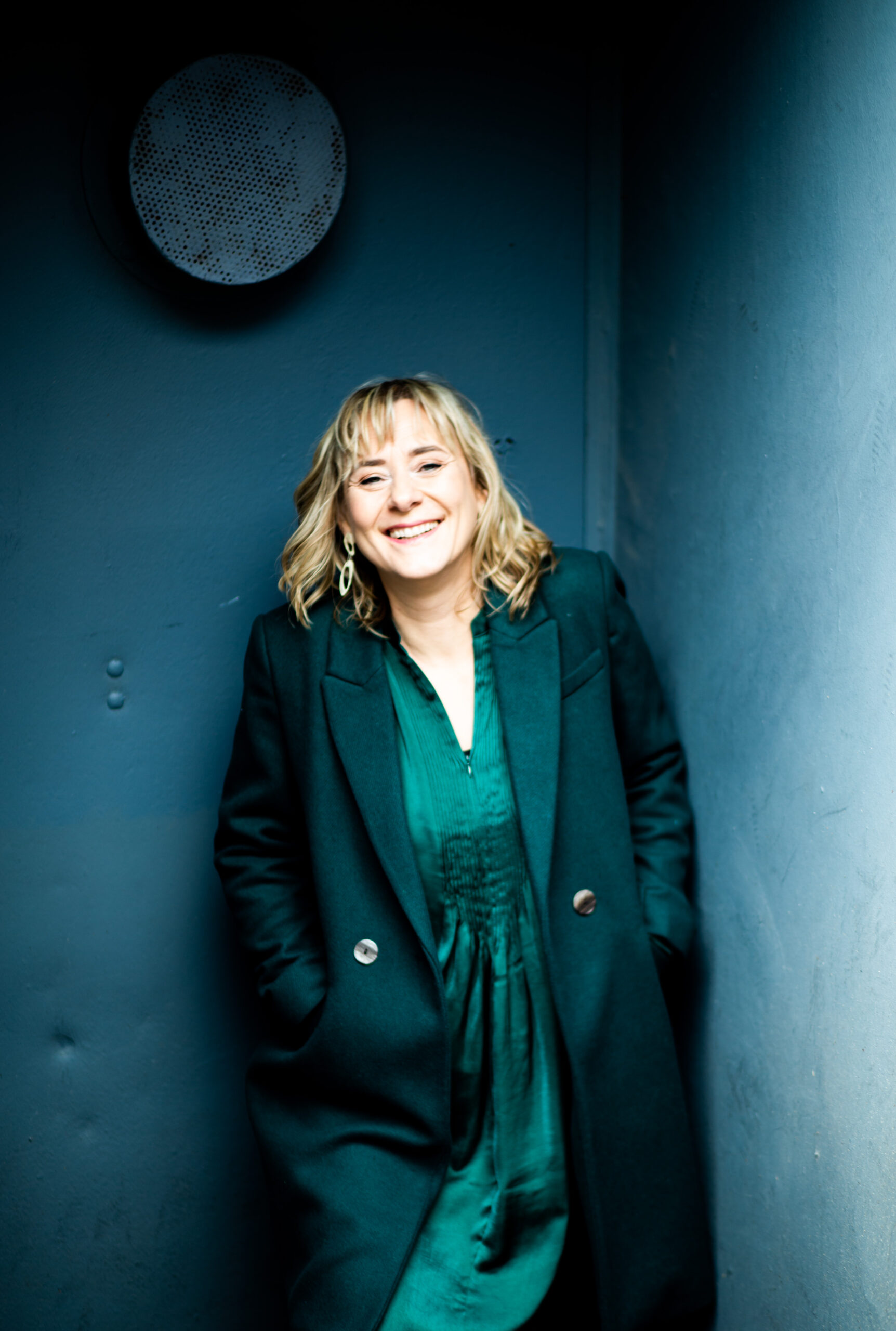 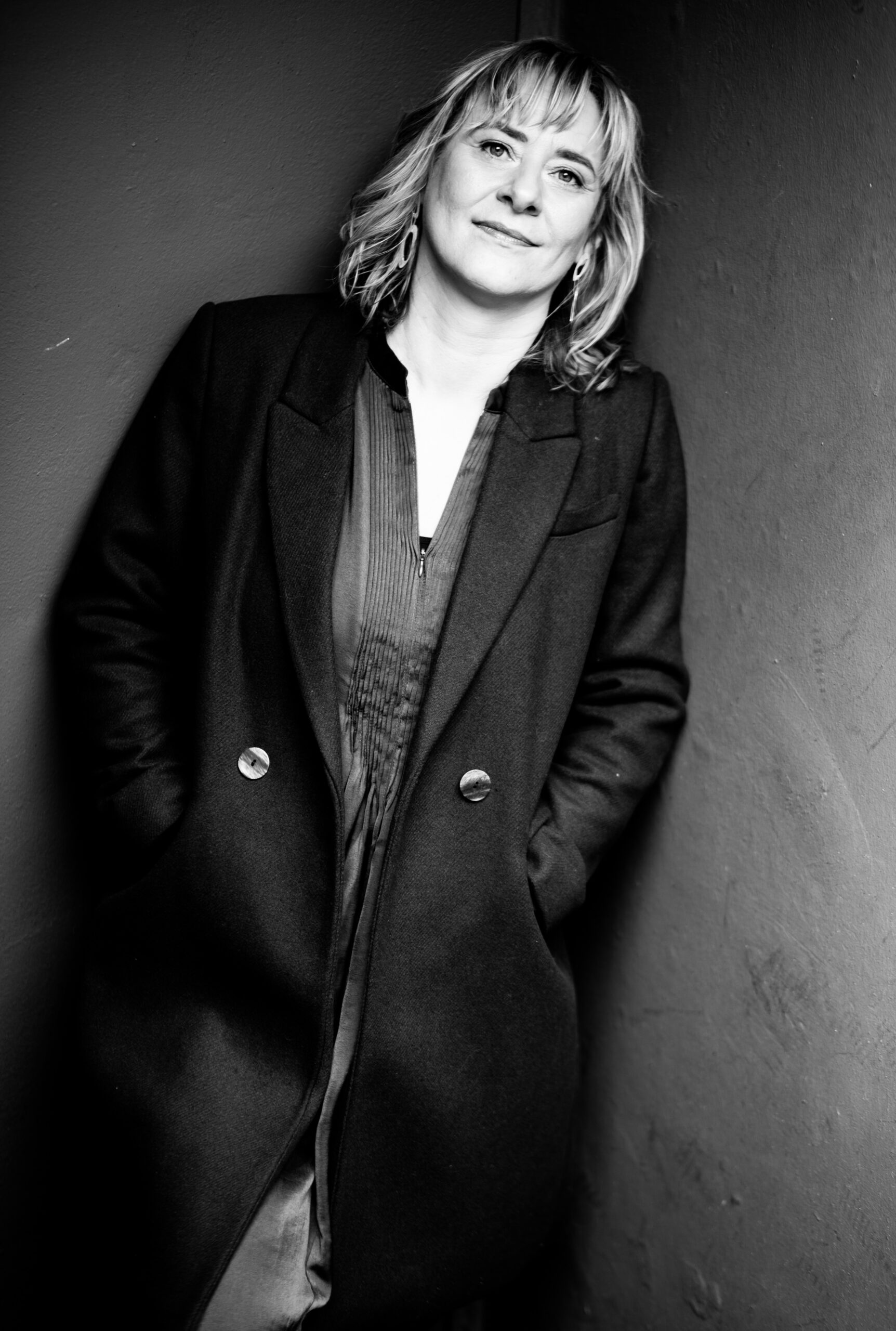 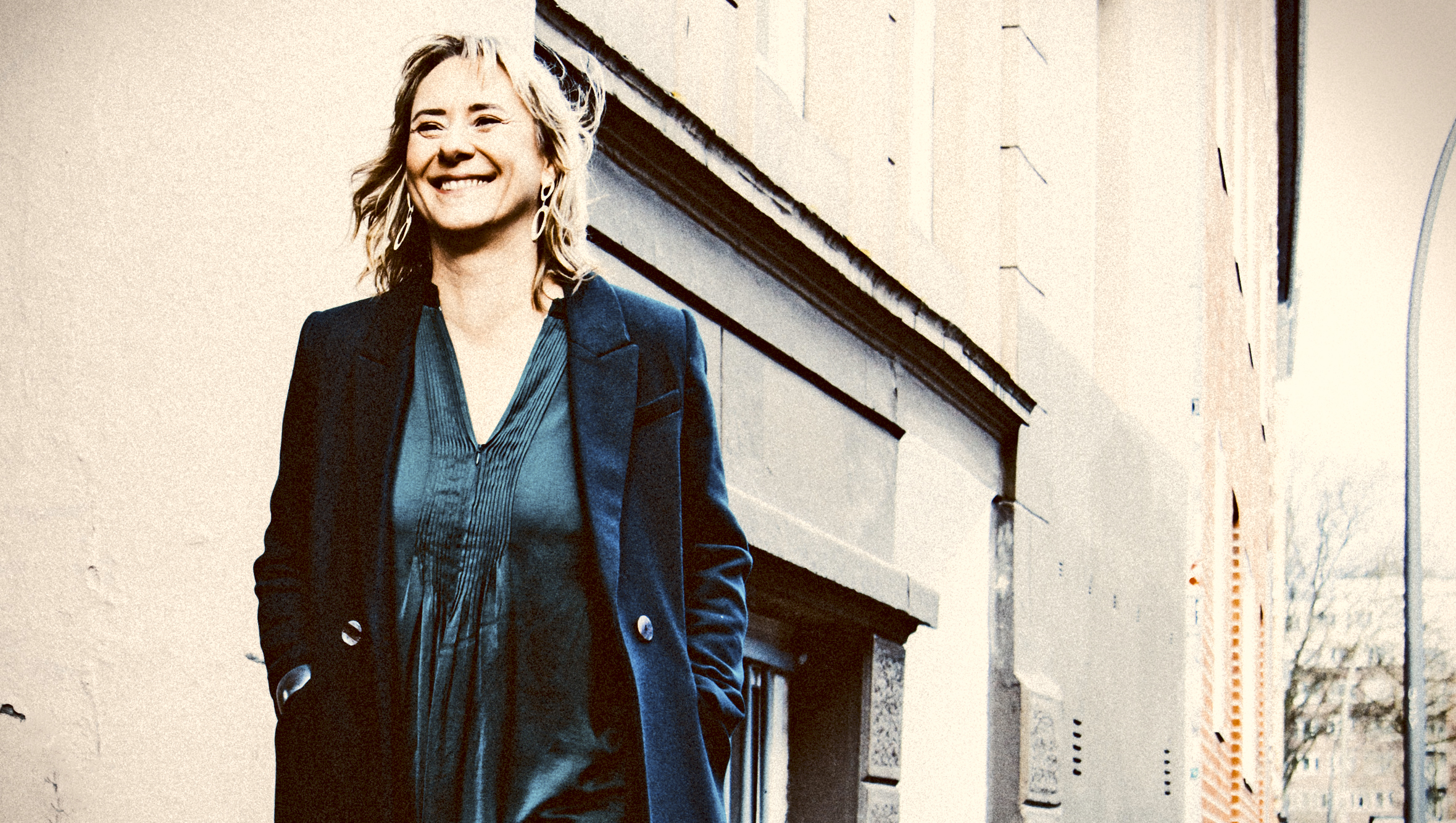 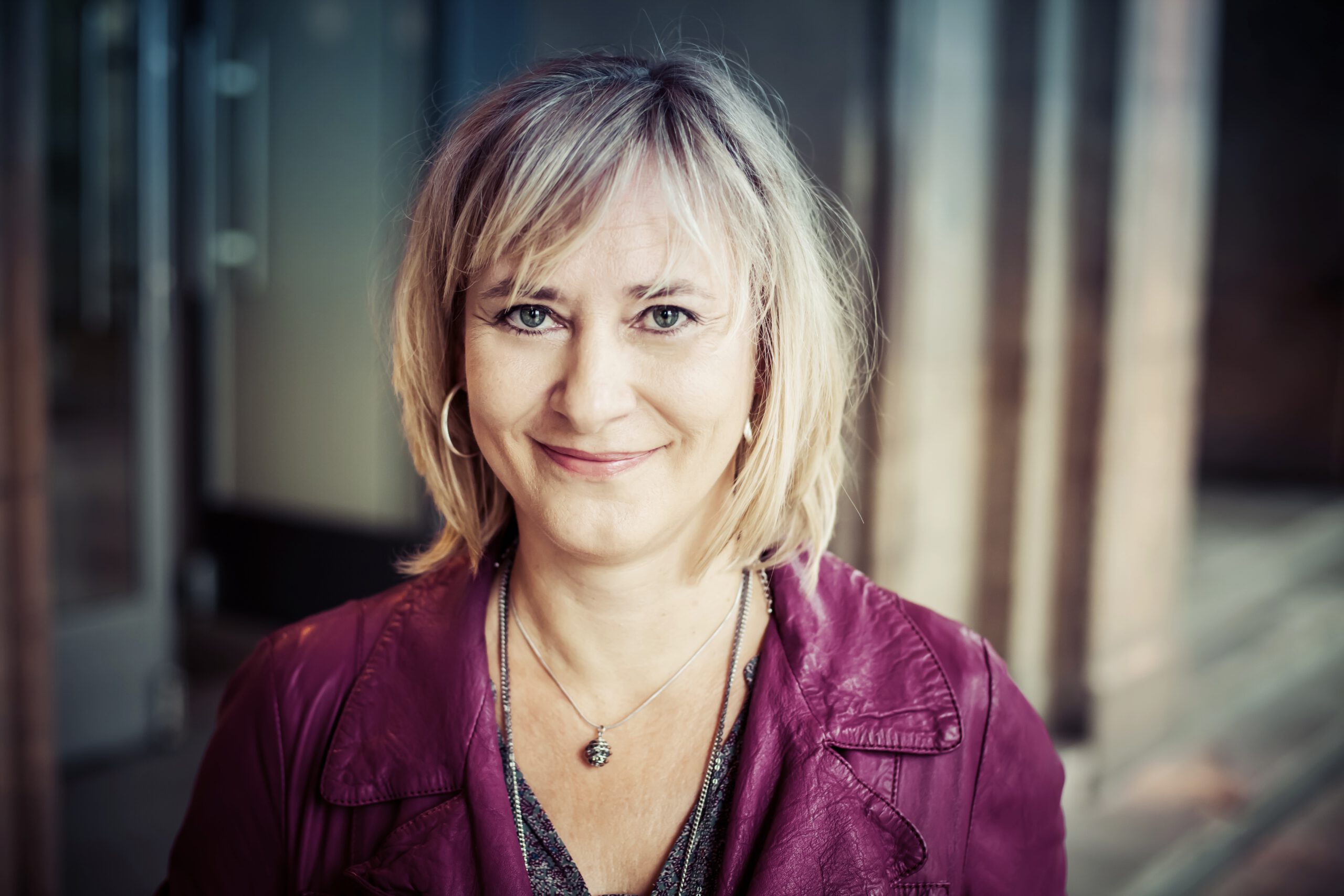 “As a “voyage on an open sea”, Britta Rex presented the programme on Monday. Improvising on Weill and Brecht, Bernd Ruf (clarinet and saxophone), Oliver Sonntag (drums), Patrick Farrant (guitar), Susanne Vogel (electric bass) and singer Britta Rex navigated freely, coming together again and again on musical “islands”. The cruise began with lines from Brecht’s “An die Nachgeborenen”. Sprechgesang, almost like rap, onomatopoeia and melodious passages by the singer alternated with instrumental parts, the musicians also shone as soloists, and at the end everyone had solid ground under their feet again with a racy “Mackie Messer” from Brecht’s “Threepenny Opera”. A gripping performance.”

“Colourful modulations and cuddly phrasings, cheerful scat and gentle intensity of feeling balance each other out. Britta Rex’s clear, white voice takes on more and more contour in the course of the evening and develops into a characteristic instrument. She confidently keeps up with the saxophone. Again and again she takes up suggestions and elements from the instrumental playing of the other musicians and improvises with them.

Wonderfully elongated melismas alternate with rapid runs, with a vocal fullness that could do without the microphone… Britta Rex’s scat singing is of an impressive instrumental agility.”

“Britta Rex also used her fingers, as she expressed her feelings in movement and gestures, but mainly she used the heaviest of all instruments: the voice. Perfect vocal and microphone technique, clean intonation, a sure sense of rhythm, precise insertions and absolutely clean vocal delivery are the product of great talent and almost accomplished vocal studies. With her charm and credibility she took the hearts of the audience by storm.(…) But also her virtuoso scat singing, this wordless use of the vocal instrument in dialogue with the piano, for example, thrilled.”

“Charm emanated from the singer Britta Rex. Loosely she interpreted the standards with her slightly smoky and modulating voice.”

“And then Britta Rex. In an unbelievable richness of facets, her voice corresponded with the others, as it were, as a fifth instrument, taking up tone sequences, following them or reshaping them, and giving insight into the dimensions of the human soul with the clarity of a mountain lake.”

(…) Compositions by Horace Silver, Kurt Weill, Tom Waits and Bob Marley alternated with works from her own pen. Britta Rex’s mezzo-soprano inspired the audience with a range from childlike, tenderly breathed sounds to powerful soul sounds.

Britta Rex led the audience entertainingly through the stylistic variety (…), scatting in the best jazz tradition, improvising to the sound of the instrumental trio or experimenting freely in dialogue with the sounds of the grand piano.”
(Günter Köttgen Tageblatt 6/2010)

Press Reviews on „Traces of life“

Under the cloak of jazz tradition

“Ask the Gods” recommends Britta Rex in the first of 9 songs she presents with her quartet and some guest soloists on the CD “Traces of Life”. A cool glow lies on these songs, they are all little narratives in which the singer traces her own life. Born in Hildesheim in 1970, she came to jazz via pop, rock and attempts at soul.  Today, Britta Rex is a sought-after “vocal coach” at jazz workshops, she teaches jazz singing at the University of Music and Drama in Hanover and works as a choir director. Her cultivated voice by no means fades into academic precision, her fine-nerved singing lives from a characteristic colouring in tone and timbre.

Her songs, arranged as artfully as delicately, covered or written by herself, alternate without any effort between quiet melancholy and elegantly swinging ballad. Whether she covers McCoy Tyner’s “You taught my heart to sing” with a heavy swinging groove or sings about rediscovering friends in her own lyrics to a highly complex melody by saxophonist Bernd Dallmann (“Lost…but finally found”), something of her own always remains audible, which, despite all the vocal perfection of this singer, gives her something soft, delicate and cool.

Her voice cannot be classified under the Nordic natural beauties, it sounds neither exotic nor broken, and yet the music and singing get under the skin. The members of her quartet (Christoph Münch, piano, Lars Hansen, bass, Edward Filipp, drums), which has existed for almost 10 years, exercise sovereign restraint and let the guests stand out solo: Besides Bernd Dallmann with a beautiful saxophone song, Beatrice Kahl (Fender Rhodes), Eva-Maria Borghoff (flute), Stefan Golinski (trombone) and Nils Tuxen shine.

All the songs of this ensemble are gems. Sophisticatedly crafted, with a love of detail, they tell of peace and harmony (“Peace” by Horace Silver), present this singer’s ability to master the classical swing vocabulary (the original composition “Studies of falling down”, a New York reminiscence, is reminiscent of Ella Fitzgerald in the access of the voice) and speak of the delight in unusual nuances:

The singer explains the closing song “Blue Burqas&High Heels” in the booklet: “A trip to the East. The music came to me when I was sitting at the piano and rehearsing. Surprised myself by the oriental character and looking for a title, I heard a moving radio report about the life of women in Afghanistan after the end of Taliban rule. Until then, girls and women were forbidden to attend educational institutions, to work, to leave the house without a male escort. All secular music was forbidden, women had to cover their bodies in burqas in public. While researching further, I came across an impressive photo showing a group of women dressed in blue burkas strolling through the streets. High-heeled silver pumps flash out from their feet.”  Does Britta Rex subliminally reveal something about her own music in this picture? Within the foreign sounds, which end here with a fascinatingly luminous scat singing, a singer finds and invents herself. Under the broad cloak of jazz traditions, in the perfect appropriation of jazz vocabulary, she discovers her own aura and expressiveness.

“Traces of Life” is a courageous album, uncompromising in its renunciation of easy-listening sounds and beautiful in its manifold simplicity.

“At first I thought: Oh God, another one of those unbearable vocal jazz records from Germany! But then “Traces of life” by singer Britta Rex and her band came on the player – and taught me otherwise. No fast-paced scat cabinet pieces, no solo choruses with macho attitude. But emotional, always classy swinging jazz songs that stand out from the mass of comparable releases, especially due to Rex’s often blurring phrasing (AO/NRW).”

“The emotional one. Whether hit or original: The delicate power woman Britta Rex sings and scats her heart out on “Traces of life” (NRW).  Emotion is the trump card, in line-ups from trio to septet. Worth the money alone: McCoy Tyner’s “You taught my heart to sing” and her own “Diavola” with Béatrice Kahl (Rhodes) and Eva-Maria Borghoff (flute).” Sound tip!

“Britta Rex (Traces of life, AO-NRW, NRW 3071) follows the “traces of life” in an extremely spirited and committed manner and sets the small and large experiences along the way to music with jazz-like skill.”

“…Energy has “Lost…But Finally Found”, a song that starts as an intimate trio of bass, saxophone and vocals and then is a real joy in the split sound. Deviating from the otherwise English lyric melodies, the peppery samba “O Fogo Da Paixão” is in Portuguese, a language in which Rex is convincing. The Oriental touch of her homage to the women of Afghanistan “Blue Burqas & High Heels” also has decided temperament, which (…) comes to the fore at the end of the jazz life programme through many spheres of human feeling.”

She took a lot of time with the new album. But it was worth the wait. With “Traces Of Life”, Britta Rex picks up seamlessly from the previous album “Fast Grass” and does so (the most difficult thing of all) without quoting herself. But the jazz fans – and not only them! – can check it out for themselves on 14 February in the Red Hall at Braunschweig Castle, when the album is presented to the public.  In addition to her own compositions, the singer has rearranged and rewritten standards. With her expressive voice, a lot of feeling and the support of her sensitive and dynamic band – Eddie Filipp (dr), Christoph Münch (p) and Lars Hansen (b) – she tells musical stories and leads her listeners on an intensive search for clues into the depths and shallows of the soul, sometimes using her voice instrumentally and mastering the technique of scat singing with virtuosity.(…)

HILDESHEIM. The recordings are in the can, everything is mixed and mastered. The only thing missing is the cover for the new CD.
Britta Rex sings in the Cafe “Nil”. And it is more than just a foretaste of that CD. A relaxed atmosphere, the tables are full, the sound is round and the band knows what they want.
It’s always amazing how in highly technical times it’s the analogue things that touch the heart. Piano, bass, drums, vocals. Of course, you have to know how to use them. And they do. Of course, they are jazz musicians, seasoned jazz musicians.
Their improvisation is correspondingly lively and technically adept, for example in Cassandra Wilson’s “Little warm death” or in Rex’s own swing composition “Studies of falling down”, a piece on the CD to come.
Rex has kept a real play child alive inside her, especially in her long scat singing interludes it comes out. The technique and experience of the greats together with uninhibited, “youthful” joy of experimentation.
The audience rejoices in the outbursts of weird harmonies and accents against the beat. The band goes along sensitively and powerfully. Especially in the skilful “Raise your voice!” scat solo.
Eddie Filipp on drums plays in a tone-painting way, rich in variations, always attentively following the singer. Christoph Münch on piano shines with sovereign, intelligent improvisations and sometimes lets the keyboard sow out. His slightly slanted ballad “Drifting away”, dramatically composed, is great.
And Lars Hansen from Hamburg fills the whole thing with such an endlessly supple, tenderly dreamy, gently caressing, sadly loving bass mildness that you wish you could spend an evening with him in the next room. Just to hear him practising.
A colourful palette emerges, with influences from Brazilian Latin, tango for Tom Waits and also world music atmosphere in Rex’s “Blue Burkas”, a pulsating piece with Arabic influences. These are mind-opening moments. “Traces of life” is the name of the record. And these “traces of life” don’t always draw themselves gently into the soul. The lyrics are correspondingly; they are always about moving on, getting back up, “life’s true meaning”, raising one’s voice, peace.
And at the very end, a really beautiful big city love ballad with Bob Marley’s “Waiting in vain”. Of course it would be nice to have a memory on CD. However, a CD can’t really do what a live jazz evening does.